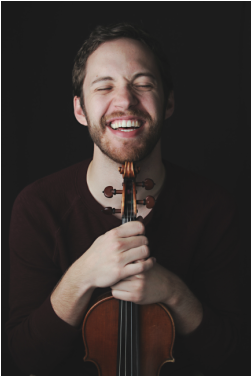 Hi! My name is Taylor, and I’m a violinist, fiddler, and educator based outside Phoenix, Arizona.

[If you’re looking for a formal, third-person bio, scroll further—it feels weird for me to open with that.]

You might wonder why I mention both violin and fiddle. Aren’t those the same thing? Yup! They're basically the
same instrument, but they have different sounds, techniques, and heritages, and are played in different contexts. For example, when I’m playing classical music in a string quartet or an orchestra, I’m a violinist; when I’m playing
folk tunes with a band, I’m a fiddler. And, frankly, music is music—I actively play music from a wide variety of
styles, so why identify with one label over another?

I grew up participating broadly in many of the performing arts, just another kid having fun, never knowing I would settle professionally in music. Eventually, I realized how much I loved music and received a bachelor's in violin performance at Arizona State University, studying classical violin with Dr. Katie McLin. After college, I was
lucky enough to land my dream job and had a blast touring for four years with Barrage, a world-music fiddle
troupe based out of Canada. When the band went on hiatus in May 2012, I spent a year freelancing in Phoenix before attending Harvard University and obtaining a master's in education.

Now, I’m on a serious mission to keep music as fun as possible, for both myself and others. To this end, I actively seek variety in my work as a musician and educator. As a performer, I collaborate with the inimitable Tricia Park as one half of Tricia & Taylor, explore chamber-folk with The Sound Accord, and pursue various projects and performances with friends; on the education front, I serve as a founding co-director of the Gilbert Town Fiddlers, direct my own summer camp called StringPlay, guest lecture at Arizona State University as part of a long-term exploration of multi-style musical skills with the students of Dr. Katie McLin, and teach a bunch of hilarious students on a weekly basis through school orchestra programs and my private studio.

That being said, I should probably get back to practicing…or lesson planning…or something.

Hailed by a class of 2nd graders as “wreely nice and kind” and “the coolest man on erth,” Arizona native Taylor Morris enjoys blurring the line between violin and fiddle. After studying classical violin at Arizona State University with Dr. Katie McLin, he spent four years touring the world as one of five fiddlers with Barrage, a world-music violin troupe based out of Canada. His travels, both with Barrage and personally, have led to performances in 48 states and 13 countries with musicians from a multitude of backgrounds. Strongly believing we can learn more about the world through collaboration with others, Taylor actively pursues musical projects in different genres. Currently, he is part of Tricia & Taylor, a genre-bending violin/fiddle duo with concert violinist Tricia Park, and a member of The Sound Accord, a string sextet that creates vibrant arrangements of folk music. Other performers with whom Taylor has recently collaborated include: multi-style cellists Mike Block, Rushad Eggleston, & Natalie Haas; fiddlers Hanneke Cassel, Casey Driessen, Jeremy Kittel, & Lauren Rioux; arts educator Steve Seidel; and the Tetra String Quartet.
Offstage, Taylor obtained a master's in education from Harvard University and is a passionate advocate for arts education. Since 2000, Taylor's teaching has taken him into classrooms around the country, with activities ranging from creating music-inspired art with kindergarteners to leading workshops at Northern Illinois University, University of Notre Dame, University of the Pacific, and Millikin University. His varied work has also led him to be selected for presentations at each of the major national conferences for music educators: American String Teachers Association (ASTA), Midwest Clinic, and National Association for Music Education (NAfME). As a kid, Taylor loved going to summer camps; as an adult, Taylor still loves going to summer camps. In addition to having taught at camps in Arizona and nine other states, he directs StringPlay, his own camp for young musicians in the Phoenix area. During the year, Taylor's main educational outlet is serving as a founding co-director of the Gilbert Town Fiddlers, an extracurricular high school fiddle group that collaborates to create its own arrangements for performance. Currently, he is in his fourth year as a Guest Lecturer at Arizona State University, working with Dr. Katie McLin and her students to explore multi-style music education and entrepreneurship. Through his teaching, Taylor is ultimately on a serious mission to keep music as fun as possible, working with students and educators to explore the incredible variety of ways to make music with string instruments.
Photos by Denise Karis.